Pathogen of Covered smut of barley

Distribution of Covered smut of barley

The covered smut of barley is world wide in its distribution. It is found all those   countries where the barley crop is grown. It is a common disease of barley in northern India.

Symptoms of Covered smut of barley

As soon as the ears of the infected plants emerge out, the first symptoms may easily be seen. The smutted or blackened ears come out of the leaf sheath, which may easily be recognized from long distance. All the ears of diseased plant become infected and all the developing grains turn into smut sorus remains covered by a white, shining, silvery membrane, which is partially developed from host tissue and partially from fungus. Due to this compact covering, the smut spores are not blown off, and thus the disease in named “covered smut”.

This is an externally seed borne and systemic disease. Every year the recurrence of disease take place by the contaminated seeds. The mycelium develops from the very beginning, along with the coleoptile and ultimately reaches the ear. During thresing the smut sori break, the smut spores are released and they make the seeds contaminated again. 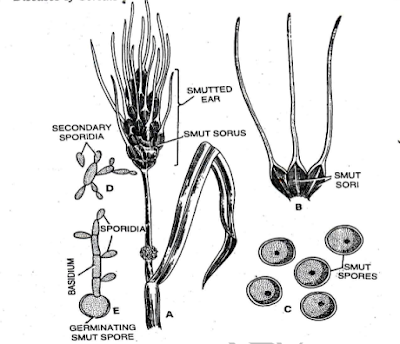 1. Rogueing:The infected plants may be uprooted and burnt.

2. Seed selection:Seed must be taken from healthy crop.