Of the several agencies by which plant pathogens are being disseminated, the air serves the largest number of pathogens and permits the most rapid and widespread distribution of them. Strong wind gusts are effective in dislodging and carrying the masses of fungal spores, bacteria, pollen, etc., to a reasonable height, and thus making them available to the convection currents of wind which carry them to great height. Thus the air in circulation carries these minute spores to long distances.

Dissemination of plant pathogens by air may take place in two general ways—(1) by wind distribution of diseased plant parts and (2) by wind dispersal of spores and vegetative cells. Spores of many phytopathogenic fungi are well adapted to aerial dispersal. They are very small and light in weight and may be carried easily by wind from one place to another. Common examples are uredospores of rust fungi, conidia of Albugo, Peronospora and Phytophthora, chains of conidia in powdery mildews, the conidia of many Ascomycetes and Deuteromycetes, and the teliospores of some smuts. Certain adaptations favour the spore dispersal. For instance the forcible discharge of basidiospores in Hymenomycetes and ascospores in many Ascomycetes.
For effective air dissemination, high spore production is also essential, because a large number of spores are wasted during this process. For example, rusts and smuts produce large number of spores. A single wheat kernel being converted into a bunt sorus by Tilletia caries contain 6-12 million spores. Ustilago maydis—the corn smut produces above six billion spores in a cubic inch of smut gall. Reproduction in bacteria is even more prolific. Because of the enormous production of plant pathogens, in spite of great wastage, during dissemination, they survive and develop during favourable conditions.
Numerous examinations of the spore content of the upper air have been made by aeroscopes, and the spores and pollen grains were found to be fairly abundant upto 11,000 feet, above which they become scarce. Nearly all the wheat grown in India is found as a winter crop in the plains. In these areas rust does not survive the intense heat of the summer, and the wheat crop is infected a new each year from rusted cereals grown in the Himalayan foot hills and Nilgiri and Palni hills of Peninsular India. The uredo-stage is abundant when the hill crops are harvested in May and June, and then persists on stubbles and self-sown wheat plants until the new hill crops are sown in the autumn. Inoculum is thus available in time to account for the first outbreak in the plains of Northern India which usually occur in January-February. The uredospores have been trapped in the air by means of aeroscopes before the rusts have been found on the crops in the plains.
The plant pathogens may be brought down to earth by descending winds or air movements just as they may be lifted by ascending ones. Ward in 1882 was the first to demonstrate the action of wind in distributing plant pathogens. In Agra, in India K.C.Mehta detected spores of cereal rusts in the air from 2 to 3 weeks before any infection could be found in fields of grain in that vicinity.

Water may serve for dissemination of plant pathogens in two ways—(1) as a medium in which actively motile organisms or spores may swim about and (2) by the mechanical action of run off of rain; the flowing of irrigation water or by stream flow. Actively motile cells may be produced by some bacterial pathogens, the chytrids, the white rusts and few downy mildews. Such forms depend wholly or partially upon liquid moisture as a medium in which they may develop and through which they may migrate by the movement of their flagella.

Among the white rusts and downy mildews which develop only on aerial parts, the aquatic habit is still retained in part and water is necessary for the formation and dissemination of their swarm spores. This is well illustrated by the late blight of potato (Phytophthora infestans), the white rust of crucifers (Albugo candida) and the downy mildew of grapes (Plasmopara viticola). The drifting of moisture from heavy dew or the runoff from rains may transport non-motile spores. Flood water, irrigation water or stream flow are also responsible for the spread of pathogenic forms. The ergot sclerotic of aquatic and marsh grasses can float because of their air content and are thus dispersed by water.
Share
Tweet
Pinterest
Email
Prev Article
Next Article 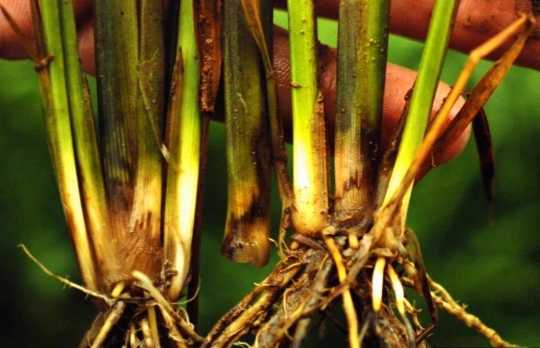