Distribution of Foot rot of rice

The foot rot of rice caused by Fusarium moniliforme was first reported form Italia in 1877. From Japan the disease was first described in 1898 and was known as bakanae disease. The pathogen is world wide distribution.

Symptoms of Foot rot of rice

The disease affects the host mainly in the seedling stage and symptoms are clearly   seen in the nursery. Sometimes the grains fail to germinate or the seedlings fail to emerge above   the soil. The most conspicuous and detectable symptoms of the disease appear in the seedling.   The affected seedling become  thin, pale and tall, such symptoms appear from the sixth days    after sowing in wet nurseries and continue upto 6 weeks. As soon as the symptoms appear the   seedling wilt and die within 3-6 days. Mainly this is a nursery disease but may occur through out   the life of the crops. In severe infection, either the panicle does not develop or a whitish sterile   ear is developed.

Nature & recurrent of disease of Foot rot of rice

Generally the disease is externally seed borned. There are evidence to slow that the disease may sometimes be soil borne. The infected stubbles and plant debris may left in the field after harvest cause infection through the soil. 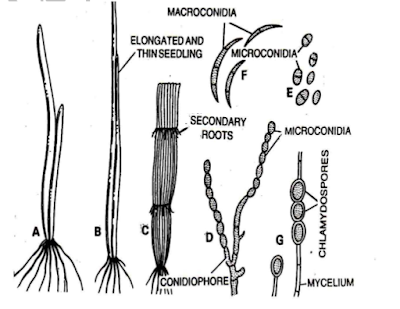 i. Since the disease is seed, soil borne, various   methods of seed/ soil treatment   have been suggested for the control of this disease.

iv. Successful control has also been achieved by hot water treatment of the grains at 55ᵒc for 30 minutes.

v. Most economic method of control is the cultivation of resistant high yielding varieties.