How to water plants [Surface irrigation with Advantages and Disadvantages]

In surface methods of irrigation, water is applied directly to the soil from a channel located at the upper reach of the field. Following are the general requirements of prime importance to obtain high efficiency in surface methods of irrigation:
>Properly constructed water distribution systems to provide adequate control of water to the field.
>Proper land preparation to permit uniform distribution of water to over the field.
>The land should be levelled well to achieve higher water application efficiency.
There are different methods of surface irrigation as follows:

This is a common methods of irrigation of wetland rice where water may be applied as a continuous flood, rotational flood or an intermittent flood. This is a suitable method for an area where cheap and abundant supply of water is available. Flooding consists of opening a water channel in a plot of field, so that water can flow freely in all directions and cover surface of the land in a continuous sheet.

1.       No other field layout become necessary except the levelling and preparation of impervious boundary bunds.
2.       No land area is utilized for water distribution. As a result, wastage of land becomes minimum
3.       Labour supervision is required for application of water in the field.
4.       Labour requirement is minimum.

This method is suitable for row crops like potato cabbage, cauliflower, brinjal, chilli, sugarcane, cotton, tobacco, tomato etc. water is applied in the furrows which are developed between crop rows in the planting and cultivating processes. There is usually me furrow between each row of crop. In orchards and widely spread vegetable crops, several furrows may be opened between the rows of the crop and the water is led simultaneously in all furrows. Furrows, are laid down along the slope when the slope of the land is about three per cent. The furrows are on graded contour when the slope exceeds three per cent and goes upto 15 per cent. The length of furrow varies with soil type, slope of the land and the quantity of water to l applied and may vary from 10 metres to 100 metres.

It is a modified form of furrow irrigation. This method suitable for a land which is quite levelled. The water is lead in first furrow and the flow of water is continued to second furrow through a breach in the ridge at the terminal end of the run. After completion of the run in the second furrow, the terminal end of the flow is continued to the third furrow through a breach. A number of furrows are irrigated with a single run of water that moves in a zigzag way through furrows. 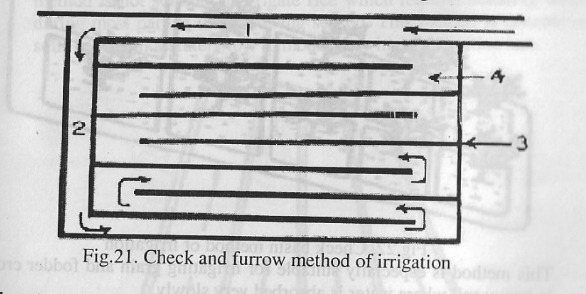 The field is divided into smaller unit areas or beds measuring 10 to 100 sq metre or even more. Bunds or ridges are constructed around the areas forming basin within which irrigation water may be controlled. The basins are levelled in both directions. Small irrigation channels are provided between two adjacent rows of beds. Water is conveyed to the field by the stream of supply channel and lateral field channel. The supply channel is aligned in the upper side of the area and there is usually one lateral for every two rows of check basins Water from the lateral channel is turned in the beds and is cut oil when sufficient water has been admitted to the basin. The basins are filled to the desired depth and the water is retained until it infiltrates the soil. 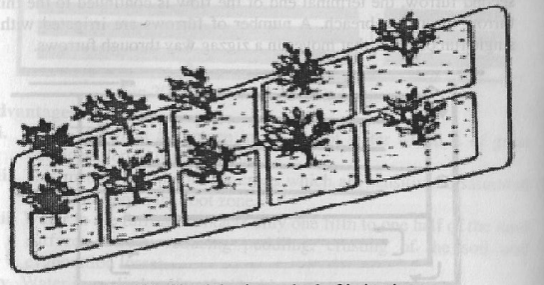 Fig.22. Check basin method of irrigation
This method is especially suitable for irrigating grain and fodder crops in heavy soil where water is absorbed very slowly.

The field is divided into a number of long parallel (3-10 ni x 50-30() m) strips which is called border. The border is separated with small parallel low ridges on the sides. The individual strips are levelled perfectly and each strip is irrigated independently by turning a stream of water at the upper elevation. The water can flow down the slope with nearly uniform depth. This method is suitable to irrigate all close growing crops like wheat, barley, fodder crops and legumes. But this method is not suitable to irrigate rice which requires standing water during most part of their growing season. This method is suitable to soils having moderately low to moderately high infiltration rate. 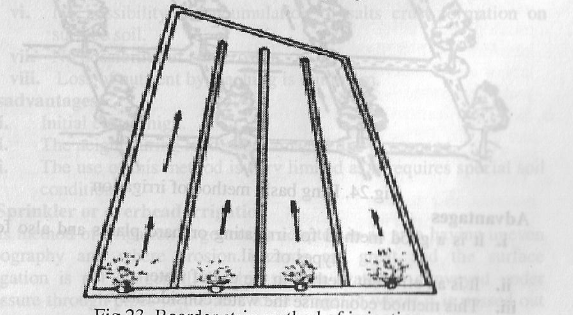 Ring basin irrigation is especially suitable for fruit and vegetable crops. A basin is made around the stump of the plant at a distance of about 30 -60 cm which may be square, rectangular or circular in shape. The individual plant or plant grown in pit is irrigated by this method. The soil around the plant is soaked with irrigation water and not the entire land. Generally ring basin is used for irrigating fruit trees. The basin is connected with irrigation channels for receiving water.

Contents1 How to water plants 1.1 Drip or trickle irrigation1.2 …