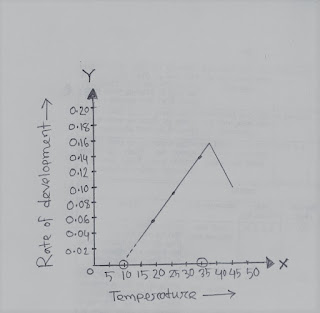 In the graph the lower threshold (10) is 0c this is a temperature in which the rate of development is zero. At this temperature insects are remain alive but no development take place.
Thermal constant (K) represent the total amount of heat required for the development of insect.
By the TL and K we can calculate the number days for development. For example; if TL=100 C and K= 140 degree days the time of insect development as follows-
240 C – 100 C= 14C (in 140 degree days)
140 degree days /140 C= 10 days
10 days will be required for the development of the insect.
2. Effect of temp on the fecundity (প্রজননশীলতা):
Insects are capable of producing eggs in large quantities. Temperature influences in egg production. If the temp is favourable insect lays eggs in large number which increase its population. On the other hand in case of unfavourable condition egg laying decrease, as a result of which insect population is decrease. At upper or lower of favourable range, the fecundity decline. In this regard a few example are sited below-
(i)                  The Aphid, Toxoptera graminum, is ovoviviparous. Young are produced throughout adult life, but rather more rapidly by the young adult (winged) then by the older one (wingless). The total number produced during the time of ne female depends on the temperature at which it is living. The relationship is illustrated as follows- 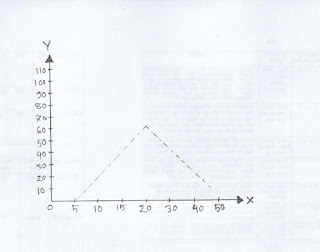 Fig: Showing the influence of temperature on the fecundity of Aphid (Toxoptera graminum) complete line indicate the winged form and broken line indicate wingless form.
With both the winged and wingless form of Toxoptera,the shape of the curve relating temperature to fecundity is the same, but that for the winged form is distributed over a lower range of temperature then that for the wingless form.
(ii)                With Thrips imagines, very few eggs are lays at 8C, but within the range 130 C-230 C, there is a tendency for more eggs laid.
(iii)               In case of Calandra oryzae and Rhizoctonia dominica(stored grain pest), the number of eggs laid reached a maximum at a medium temperature 260 C, for the sparser population and 290 C for the dancer one. At temp above and below this fewer eggs are produced.
After Birch (1945)
(iv)              Within the European corn borer Pyrzusta nubitalis, the moth laid more eggs at 290 C than 210 C and 320 C.
After Vance (1949)
3. Effect of temperature on the mortality of insect:
The general limit of temperature for the survival of insect ranges from 00 C- 500 C. At temperature above and below this insects can’t survive.
(a)Extreme high temperature: If the temperature is very high desiccation occurs in the insect body as a result of which denaturation of proteins occurs. Hence their metabolic activity become imbalanced and that is why insect can’t survive.
(b)Extreme low temperature: Again when temperature goes below 0 C i.e. below freezing the body fluid of insect become crystallized. Haemolymph movement is hampered as well as metabolic activity become imbalanced. As a result insect can’t survive.
4. Influence of temperature on longevity:
If the temperature is higher (not extreme) longevity of insect is in generally short. And if the temperature is moderate the longevity is higher.
5. Influence of temperature on behavior:
Temperature influence insect behavior. Each species of insect has certain temperature limit for its activity and movement, beyond which the activity of insect decreases. For example, the swarm of locust of locust Schistocera gregaria often spend the night “Roosting” in trees and shrubs. In the morning they descent to the ground. Again the swarms begin migrating when the temperature ranges between 170C- 220 C.
6. Influence of temperature on distribution of insect:
Seasonal distribution: Temperature influences the seasonal abundance of insects. For example; In our country in summer aphids are not found because of absence of suitable temperature while in winter they are abundant.
Diurnal distribution:Insects are come out at different time due to temperature differences. Diurnal butterfly, nocturnal moths, cutworms etc.
Share
Tweet
Pinterest
Email
Prev Article
Next Article Contents1 Apiculture1.1 Species of honey bee 1.2 Honey bee CastesThe insect which are lived together is called social insect. They live in a colony. In a colony, have to maintain many rules and regulation based on division of labour. In a colony they are divided into several grades. These group are nothing but called caste. In honey bee, there are four caste1.3 …