Symptoms and Management of Late Blight of Potato

Late blight is the major limiting factor to increase potato production. In Bangladesh, the  infection of late blight was first reported in 1922.

Symptoms of Late Blight of Potato

3) A white downy growth of Sporangiospores and sporangia forms at the edges of the spot,  most commonly on the lower leaf surface.

In severe cases on stem, the disease may extends on the stalk quickly and the entire crown  may fall over in a rotten pulp in a day or two.

If allowed to spray unchecked, the disease will reach the tubers. Affected tubers have a  reddish brown decay below the skin. Early attacks of blight may not be visible on tubers but  any infected tubers will rot in stored condition.

The Pathogen, over winter infected tubers. When that infected tubers are planted, the disease  develop on the emerging plants. The fungus produces abundant spores and help in secondary  spread of the disease. The spores are spread by rain water, wind and equipment. In presence  of high humidity, the fungus forms sporangiospores/ Conidiophores through the stomata on  the lower side of the leaves and produces zoospores (In cool weather, 12C) or Conidia (In  warm weather at about 25C) on germination. 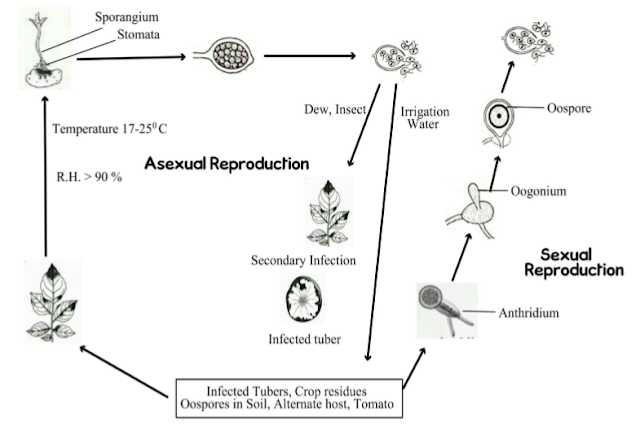 Zoosporangia release many bi­flagellate zoospores and Conidia (asexually) and Oospores  (Sexually) which may produce germ tube and infect the plant.

The following condition are considered for forecasting the disease

▲ Night temperature below 10C for at least 4 hours.

▲ Clouds on the next day.

♦ Seed tubers should be taken from healthy plant.

♦ Crop residues and alternate host should be destroyed.

♦ Crop rotation should be followed.

♦ Tubers should be collected after 7­-10 days of cutting and removing top of the plant.

♦ Do not lift tubers when soil is wet.

♦ Tuber should be treated by dipping in Bordeaux mixture (1%) or other fungicides  e.g. Dithane M­45 (0.2 %) for 3­5 minutes. If weather remains wet and cool, spraying  should be repeated every 10 days.

♦ Dip the tubers in formalin solution for 3­5 minutes and cover them under the moist  gunny bags for 2 hours and finally dry them before sowing. Contents1 Leaf blight of maize management with its symptoms1.1 Pathogen …