Secondary thickening of the cell-wall may be more or less uniform all-round the cell and almost always has a stratified appearance. But in those cells which have to ultimately grow into vessels and tracheids, it may be localized to particular portions of the wail, forming in special patterns. In these cases, it is due to the deposit of a chemically complex and hard sub-stance, called lignin, in the meshes of the cellulose network. Such thickening takes place only after the aforesaid elements have grown and attained their full dimensions. The thickening being localized, a portion of the wall may remain unthickened.
The patterns of thickening may be as follows
(1) Annular or ring-like (A)—–when the deposit of lignin is in the form of rings, which are placed one a little above the other in the interior of the original cell-wall, the remaining portion of the wall being unthickeried.
(2) Spiral (B)–when the thickening takes the form of a spiral band.
(3) Scalariform or ladder-like (C)—when the thickening matter or lignin is deposited transverse-ly in the form of rods or the rungs of ladder, hence,

FIG. Thickening of the cell-wall. A, annular; B, spiral; C, scalariform; D, reticulate; E, pitted (with simple pits); F, pitted (with bordered pits)
The term scalariform or ladder-like. The unthickened portions of the wall appear as transverse pits, while the thickened spaces between them give a ladder-like appearance to the wall.
(4) Reticulate or netted (D)—when the thickening takes the form of a network, evidently leaving a number of irregular, unthickened spaces in the wall.
(5) Pitted (E-F)—when the whole inner surface of the cell-wall is more or less uniformly thickened, leaving some small, unthickened areas or cavities here and there. These unthickened areas are called pits, and are of two kinds, viz. (a) simple pits and (b) bordered pits. Pits are formed in pairs and they lie against each other on opposite sides of the wall. The portion of the original wall separating the two opposing pits is called the closing membrane. The closing membrane in the bordered pits shows a slight swelling or thickening in the middle, called torus. When the area of a pit is uniform throughout its whole depth, it forms a simple pit . When the area is unequal, broader towards the original wall and narrower towards the cavity of the cell, more or less like a funnel without a stem, it forms a bordered Pit. 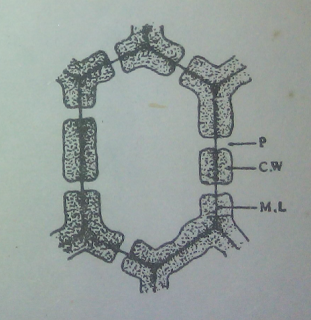 FIG. Simple Pits. A cell in section showing simple pits in its wall; P, pit; C.W., cell-wall; M.L. middle lamella.
In a bordered pit, the adjoining thickening matter of the wall grows inwards and arches over the pit from all sides, forming an overhanging border, and hence the name ‘bordered’ Pit. Viewed from the surface the simple pit may be circular, oval, polygonal, elongated or somewhat irregular, while the bordered pit is often circular or oval. Pits are areas through which the diffusion of liquids takes place more easily. 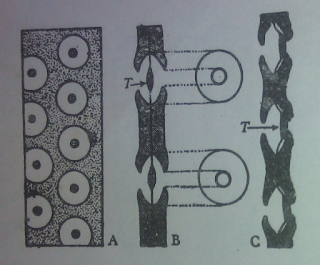 FIG: Bordered Pits. A, cell wall with bordered pits (surface view); B, the same (sectional view); C, the same showing the torus (t) pushed against the pit and blocking it.
In bordered pits, this diffusion is regulated to a great extent by the torus, which, when pushed from one side, blocks the pit. The diffusion of protoplasm, too, takes place through simple pits, which are found in living cells. Bordered pits are abundantly found in the tracheids of conifers (e.g. pine) and in the vessels of angiosperms. Simple pits are also found in these, but they occur more frequently in some of the living cells, and occur largely in the wood parenchyma, medullary rays, phloem parenchyma, companion cells etc.
Share
Tweet
Pinterest
Email
Prev Article
Next Article

What is plant adaptation? Definition: Adaptation may be defined as the …

Generalized structure of a plant cell What is cell? Cell …