Distribution of Stem rot of rice

The disease has been reported from all rice growing countries such as Japan, Chaina, Philippines, Srilanka, Italy, Brazil, USA, etc. The sclerotial stage of stem rot of rice was first described by cattaneo from Italy in 1876. In India, the disease was first reported by shaw from Bengal in 1911.

Symptoms of Stem rot of rice

The disease is commonly found in the transplanted crop in the month of July-September. First of all small dark lesions are developed on the outer leaf sheath at the water line. Later on this lesions gradually make their appearance on the inner leaf sheaths and the culm. The affected and numerous small dark brown sclerotia are formed in the tissues of leaf sheath. In later stages, the mycelial mats and the sclerotia are copiously formed inside the culm also. Rotting   remains restricted to a few lower internodes. As the plants matured the intensity of infection is   increased. The culms collapse and plants lodge heavily, when the infection attackes place later in   the growing season the grains are much shrivelled. 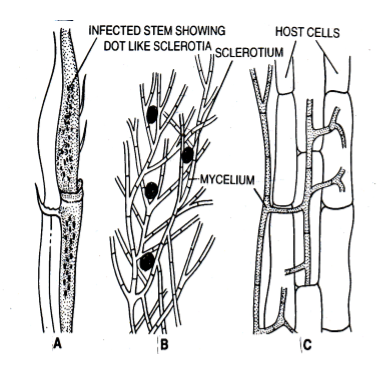 iv. Excess use of phosphorus fertilizer. Symptoms and Management of Late Blight of Potato Causal organism: …