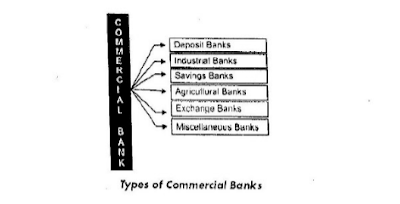 The most important type of deposit banks is the commercial banks. They have connection with the commercial class of people. These banks accept deposits from the public and lend them to needy parties. Since their deposits are for short period only. These banks extend loans only for a short period. Ordinarily these banks lend money for a period between 3 to 6 months. They do not like to lend money for long periods or to invest their funds in any way in long term securities.

These banks were specially established to encourage thrift among small savers and therefore, they were willing to accept small sums as deposits. They encourage savings of the poor and middle class people. In India we do not have such special institutions. But post offices perform such functions. After nationalization most of the nationalized banks accept the saving deposits.

Agriculture has its own problems and hence there are separate banks to finance it. These banks are organized on co-operative lines and therefore do not work on the principle of maximum profit for the shareholders. These banks meet the credit requirements of the farmers through term loans, viz., short, medium and long term loans. There are two types of agricultural banks,
(a) Agricultural Co-operative Banks, and
(b) Land Mortgage Banks. Co-operative Banks are mainly for short periods. For long periods there arc Land Mortgage Banks. Both these types of banks are performing useful functions in India.

These banks finance mostly for the foreign trade of a country. Their main function is to discount, accept and collect foreign bills of exchange. They buy and sell foreign currency and thus help businessmen in their transactions. They also carry on the ordinary banking business.
In India, there are some commercial banks which are branches of foreign banks. These banks facilitate for the conversion of Indian currency into foreign currency to make payments to foreign exporters. They purchase bills „from exporters and sell their proceeds to importers. They purchase and sell “forward exchange” too and thus minimize the difference in exchange rates between different periods, and also protect merchants from losses arising out of exchange fluctuations by bearing the risk. The industrial and commercial development of a country depends these days, largely upon the efficiency of these institutions.

There are certain kinds of banks which have arisen in due course to meet the specialized needs of the people. In England and America, there are investment banks whose object is to control the distribution of capital into several uses. American Trade Unions have got labor hanks.  Where the savings of the laborers are pooled together. In London, there are the London Discount I louse whose business is “to go about the city seeking for bills to discount,” There are numerous types of different banks in the world, carrying on one or the other banking business.

You can read more articles about Agricultural Economics Types of Banks in Bangladesh   The names of the … The basic concept and types of demand: There is a …