Distribution of Powdery mildew of wheat

Symptoms of Powdery mildew of wheat

The pathogen is an obligate parasite and usually found on leaves, young shoots, inflorescences and other young tissues of the host plant. The fungus may appear in an isolated white path, in the beginning, which may coalesce with other patches and form big ones on the  leaves. Sometimes whole of the leaf is found to be affected. The mycelium on the host is entirely   superficial, forming a flocculent matted growth, at first white when the conidia being formed, there after changing into a grey or redish-brown colour when cleistothecia are developed. In severe cases the leaves become crinkled, twisted or variously deformed. The top of the shoot droops down and withers and ear developed is checked to some extent. Later on, usually at earing time, small, dot like, spherical cleistothecia are formed in the superficial mycelial weft.From much discolouration and coverage of the host epidermis by the fungus, photosynthesis is less and there is much chlorosis, which makes the plant week. The development of the infected ears is arrested and the ears wither. If the disease incidence takes place at the milk stage, the grains are dried and shrivelled.

The pathogen: The disease is caused by Erysiphe graminis DC var tritici. This is an obligate   parasite. 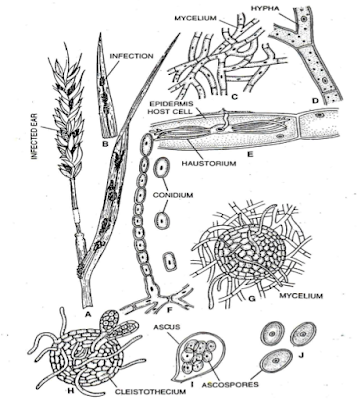 The recurrence of the disease takes place through the cleisothecia ( the perennating body). The cleisothecia perennate on the straw and plant debris after harvest and provide the necessary inoculum for the next season. The primary infection is brought by ascospores and the secondary infection is form the air borne conidia.

2. Chemical control: Sulpher dusting has been proved to be fruitful in the control of this disease. But the cost of treatment is prohibitive and the control is not practical.